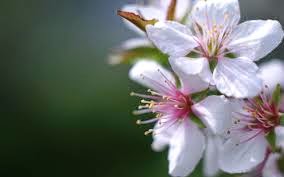 There is a war going on in Hollywood between nature and man, and in the areas where man has the advantage, nature is truly beaten down. Nowhere is this more evident than with the trees along Santa Monica Blvd. east of Highland. These poor damn trees, you would think that they would just give it up, but then that is not in their makeup, so they struggle on against all odds: excessive pruning, street pollution, vandalism, lack of space, water, and care. They remind me of fish that have been pulled from the sea and continue to flop around as though still submerged, gills opening and closing to water that is not there. These fish act as if the water might just be out of their reach, rather than it being completely removed, but perhaps that is just in their nature to "think" this way. I am quite sure that fish do not have a concept of being "out of the water", and in the same way, I suspect that trees lack any sense of being "out of nature".

Many trees thrive out of nature, granted, if their caregivers approximate a nature environment, but there are not any examples of these trees on Santa Monica Blvd. east of Highland.
These trees are not the trees of Pasadena, or the trees of Hancock Park, nor are they the trees of Silverlake. Instead, they are trees that fight for life as though they have no choice but to fight, and for that, I love them. Every Spring, which in Southern California starts in January, these survivors burst with a display of blooms that defiantly declare their intention to go at it for another season. It amazes me that these lovely delicate blooms are capable of appearing from within the soot-covered, gnarled, mutilated branches of trees trying to grow out of concrete holes.

The newly planted trees along Vine St. actually have it worse, if that is possible. The city had spent several thousand dollars planting Jacaranda trees along Vine between Santa Monica Blvd. and Sunset. One night last summer vandals proceeded to damage 32 of the trees by cutting the tops off and leaving just the trunks--a random act of such careless violence that it causes one to question the very culture we live in. I would ride by these trees and almost feel as though I were in mourning, it was so sad to see. The city did not want to replace them until they could be sure that the vandalism would not be repeated, meaning that the trees were not replaced at all. 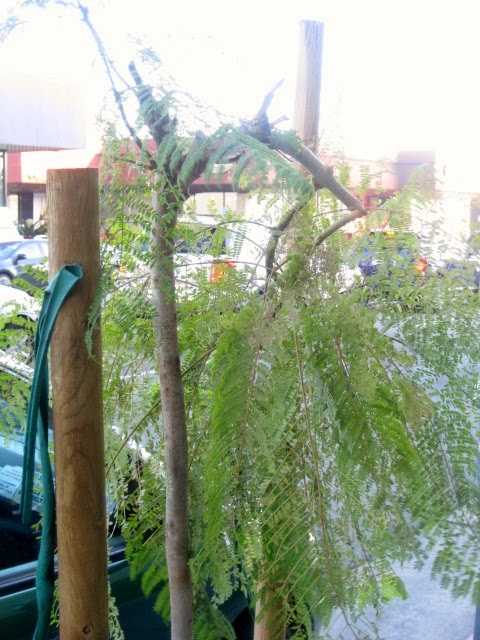 Happily, with trees being trees, many have survived and have sprouted new branches from their chopped stumps, and it is hoped that the imbeciles who caused the damage last year have now moved on to other distractions (who says there aren't silver linings to stupidity?) I get the sense that the trees along Vine, after the acts of violence, just continued to do what trees do, which is continue to grow in any way possible, even after being damaged and left for dead.

Perhaps someday the city planners will start over from scratch, pouring new sidewalks and pulling the gnarled old trees to replace them with fresh, strong new saplings. We are obliged.
This has already been done further west in the privileged areas of West Hollywood and Beverly Hills. With greater care and numbers, the trees have a collective chance to thrive, which also means that the city and its dwellers have a chance to thrive as well. You see, none of us are really "city dwellers", we are all just displaced nature dwellers, and just as we sweep the walks and paint our houses, we are obliged to care for our green kin.

***
From time to time I get a therapy client suffering from the effects of depression, and I usually love these clients. You might think that it would be depressing to see a depressed client for therapy, but I find that it is often the opposite. They would not be in therapy if they wanted to continue being depressed. So even though there is at times a slower pace to the progress, there is certainly intent to drive it forward. 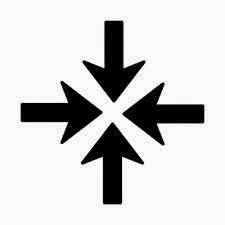 The way I see it, depression is not something that is a "part of us". I hate the phrase "He/she is depressed", because it immediately limits the expressive capacity of the person. I see depression as something that affects people rather than something that they are (similarly, we say we are suffering from a cold, not we are the cold). While I do agree that there are certain hereditary aspects and chemical conditions that invite greater vulnerability to the effects of stressors, I strongly favor the theory that depression is a response, not a disease. What supports this? The fact that clients can locate times when depression does not affect them. How then can they be depressed?

The term disease is generally used for any condition that can be biologically sourced, and that would include conditions of the brain. But just because something shows up in one's biology, it does not immediately indicate that it started there. I favor the disease definitions that include environmental stressors as sources of depression, but for me I would go further and say that depression is a condition directly sourced in the environment. 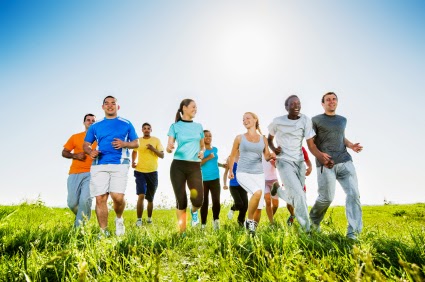 Our biological bodies know what to do "in nature". They are amazingly efficient biological structures that run really well when given what they need. However, it would not be a stretch to assert that in modern life, our bodies rarely get "what they need". What are those things? Well, the simplest answer is good food, natural sleep, fresh air, clean water, daily movement, basic shelter (note the qualifiers). What else? We need people. Not just any people, though, but people we feel safe around and whom we are attached to. When we don't get those things, we look for substitutes, if we can find them. But the substitutes never fill the place of the real thing longer than a temporary span of time. Eventually, our bodies protect themselves by shutting down the need, which can have a physical and mental effect: anger, isolation, anxiety, paranoia, and depression. This is the basis of the idea that depression is a healthy response to an ill society, and you don't need me to tell you of the ills of society.

But I will. Profit driven rather than profit sharing, class-ism rather than inclusion, closed doors rather than community, sex rather than intimacy, strangers rather than tribe, independence rather than interdependence, cash rather than barter, narcissism rather than humility, boredom rather than curiosity. Disconnect from food sources, labor, dirt, nature, civility, manners, risk, play, silence, walking, laughing, thinking, simplicity, patience, wisdom, respect. Reliance on technology, walls, comfort, money, status, ownership, power, validation, opinion, dogma, violence, youth. We all play some or all of the game, we all feel the effects, but we all have the ability to choose toward our nature, once we are made aware that we have the choice.

The clients who come to me complaining of depression remind me of the trees of Santa Monica Blvd., east of Highland. They are "out of nature": clipped, ignored, and not sufficiently cared for. But they are also alive, and their biology is telling them that, despite it all, their nature is to live while alive. When they come into my office they often have their tops chopped off, but they are struggling to grow new branches, and if things go well, within a few months I can see buds blooming from formerly gnarled, soot-covered branches. Because that is our nature, as long as we are alive.

***
No matter how old I get, I notice that I continue to bloom. Some years I only show a few blooms, but as long as I care for my nature, I will have the ability and the desire to flower in the sun. If I forget how to do this, I only need to walk half a block and let the trees on Santa Monica Blvd., east of Highland, remind me.