why i am different 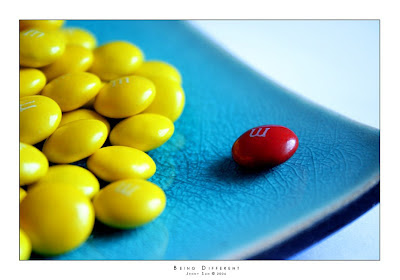 there are certain aspects of being "me" that frequently make it difficult to get through the day. that is just a fact--one that i have learned to live with, because, let's face it, i don't have many other choices. and yet, have you ever noticed (when it comes to that certain peculiarity that we may, if we are lucky, uncover before anybody else notices it), that while being an extra load to carry, there is also fondness and pleasure to be found in the tingling discomfort? if we are smart, we figure out how to prosper, despite our peculiarity, and often because of it. but this takes more than simple determination. action, as i see it, like consciousness, is a relationship between the brain, the body, and the outside environment. i won't go into the details here, but if you even spend a split second considering one of your actions, you will easily reach the same conclusion.

well, i have spent many years working on the part of the equation that i have the most control over, and if you haven't guessed, that ain't the environment. one of the ways that psychotherapy can work well is in addressing the mind-body relationship. if you have someone who really knows their stuff, and they are willing to use a macro approach to your challenges--taking a bit of it off of you (opening up ownership of "your" problems)--then the role of the environment will also come into the discussion. in my case, i felt for many years that my peculiarities were solely residents within my psyche, and that i was the one variable that needed to change. i tried everything: therapy (of course), meditation, yoga, erotic energy retreats, self-actualization workshops, even the parts that i chose as an actor. and all of these things were effective in helping me learn how to walk in the world.

but it wasn't until my graduate education began that i came to realize how powerful a role our environment plays in our lives.

i began my graduate studies in psychology ten years after i arrived in los angeles, or mid-point between when i arrived and when i am planning to leave. before my return to school, i was working in the entertainment and catering businesses, trying to make a career as an actor/dancer/singer (and sometimes doing it!). that career path is what brought me to los angeles from san diego in the first place, but that was not the only reason i came here. in san diego, i was aware of being in a "medium" city--not exactly a small city, and not a large one. there are those who would call san diego a large city, but i am not among them! now, los angeles, that is a large fucking city!! as far as the city population itself (not the county counts), los angeles has nearly four times the amount of residents as san diego. large!!!! it was this very largeness that appealed to this san diego boy...i wanted to live a large life in a large city, not a medium life in a medium city. i have never been "medium". (hint: i have just identified for you one of my peculiarities!)

my time in los angeles (20 years) has been an exercise in noticing how the environment reacts against my mind and body, and vice versa. and that is where my differences come in to play. some of my differences are visible, as in the way i behave or respond, and some of them are not, as in the way i think. before you can understand the role that "los angeles the environment" has had in my life, you should at least know some of the ways in which i am different.

the short list of external differences:
-i don't have a car. i ride a bike exclusively in the city--in traffic.
-i have not had cable t.v. in years.
-i do not have an iphone.
-my phone does not have data service--i use it to make and receive calls, and to send and receive texts. it is usually off, and inside of my backpack. i feel embarrassed to have phone conversations in public.
-at the gym, i do not even have my phone. i do not wear earbuds at the gym.
-i read books. NOT on a kindle, but real books.
-i clean my own apartment, and i cook my own food. i am very good at doing both of these tasks.
-i currently have NO online social profiles other than facebook, which i keep private. i am not on grinder, and probably never will be, because i think too highly of myself.
-i have less than 100 friends on facebook, 20 or so of which are family. i know everybody who i am friends with on facebook, with the exception of three people who live in other countries.
-at nearly 50 years of age, i rock skinny jeans.
-i know how to spell really really well.
-sometimes i am an asshole, and i don't apologize for it, because the people who are receiving my assholeness deserve it...um, most of the time.

the short list of internal differences:
-i am an atheist. i think that belief in god signals a lack of critical thinking skills, or at the very least, an unwillingness to be "comfortable with the chaos". sue me.
-i don't "feel" gay, even though i have been having sex with men for nearly 35 years.
-i think that i am smarter than most of the population(internal), and i let people know it(external).
-i prefer solitude over vacuous company. i would rather do one on one. actually, i prefer solitude.
-i think about death, a lot, which means that i think about life, a lot.
-i create my own meaning in life.
-i don't think about love the way most people do.
-i don't think about sex the way most people do.
-i cherish my long term friendships, and could not imagine my life without them.
-music is my greatest influence.

if you think about this list, i do not sound like an angelino. not...at...all. this city is full of superficial and insecure people who flaunt their cellphone conversations like IMDb resumes. in their quest for meaning and importance, they jump on spiritual trends with an earnestness that borders on pathology; they defend online information as though they actually know how to review studies, when the reality is that the required attention span would elude all but the most dedicated ritalin users. they embrace youth with the desperate yearning of a poet seeking rhymes, without any of the meaning. they relate to their sexuality as a dog relates to a fire hydrant--with limited interest and a detached commitment. they try to love, but hate that they have to try. they have sex, resenting the feeling that they don't know how to love. they define identity by album pictures in facebook profiles, and "friend" others with as much discretion as one might pick lint off a jacket.

this is a lost city, and i detest most of the people who live here(except for the ones
i don't). my "relationship" with the environment here is unhealthy, at best, because the environment--los angeles and the film/television industry--largely creates the angelino described above. i do not want to further become one of them.