so...kind of revising my plan. not that it was even a plan, perhaps a plan in planning (can you still call that a plan?). at first, was thinking that once i get my mft license, i will begin to work here in los angeles and, while doing that, continue to investigate areas for possible movage. that was the plan in planning. but lately i have found that, at times, recently, it has become unbearable to be in los angeles. at times, i say. i am not sure if the city is changing towards me or if i am changing towards it, but it seems that just a couple of weeks ago it hit me that i cannot spend another ten years here. i would be nearly sixty years old at that point, and to tell you the truth, i am not so sure that i would be able to counteract the affect that ten more years would have on my personality/social skills.

perhaps it is also just that i am anxious to start the next chapter of my life--outside of los angeles. this is a good thing, as it indicates some excitement about what is next in my life. i will admit that when i think about moving, it is exciting! not the moving, of course, but the arrival! i have not moved in over ten years now, and while i don't wish to move anywhere else in this city, i do miss the "freshness" of a new place. that could just mean that i need to clean this apartment, which i will admit is probably true (everyone comments on how "clean" it is, but there is a difference between clean and neat, and i tend to keep the lights down real low), but freshness extends to new neighborhoods and new neighbors, exploring the nearby stores and gyms and coffee shops, you get the idea. i remember how fun it would be to decide what store would be my new grocery store, and where i would mail my letters (when i used to write letters), and whether or not the chinese place on the corner would become my new take out favorite place, which is ridiculous, because i NEVER get chinese take out, but you get the drift!

for me the issue is quality of life. i truly feel that i could have a better quality of life in a smaller, greener, more academic city. this is not just wishful thinking, mind you, but an opinion based on how i am here in los angeles and how i am elsewhere. sometimes i make an effort to adjust the way i am in this city--with mixed results. for example, on halloween weekend it was beautiful on sunday. it had rained a bit a couple of days before, but on sunday it was bright and warm, and i decided that i would go to the ol' farmers market across from my job before starting work at 330 that afternoon. i felt that i wanted to see what was going on for the holiday, and also check out the kids in costumes and the general holiday feel that might be happening. i took my camera with me.

the market was brimming with folks, and everyone seemed to be having a good time. there were lots of families, of course, and lots of kids running around like crazy in costumes that ranged from superheroes to princesses to the more abstract bee or banana. adults are not very creative when it comes to children's costumes, but i have a hunch that if left to their own devices, children would come up with some killer costumes! this is because adults, when unbridled, come up with some killer costumes for themselves, and i suspect that they come up with them from the same place that kids would--the imagination. not so sure that batman comes from the imagination, but hey, who's judging here. anyway, i wanted so badly to take some pictures of the kids running around, but i felt, well, weird about doing so. i thought that i might be looked at as some kind of weirdo, collecting pictures of little children. i realized that the best thing for me to do would be to simply ask the parents if i could take a picture of their kids, but even this scared me. if this is hard for you to understand, believe me, it is hard for me to understand as well, but that is part of the defensive posture that has protected me in this city. stay away from people. it is quite difficult for me to approach total strangers and start an interaction, and i would like to be in a place where this is not so difficult for me. a smaller, greener, more academic place, if you will.

so i had to snap some pics of kids incognito, because i could not help myself--they were so cute! if anyone noticed, nobody said anything. i was not tackled and handcuffed, and i didn't make any children cry. 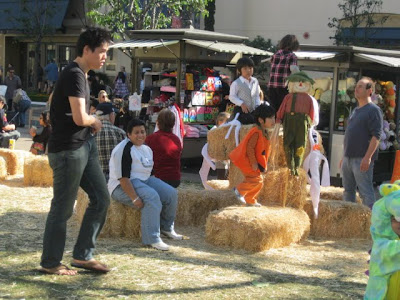 i enjoyed watching them play on the hay bales. of course, this being los angeles, the whole setup was fake, but kids don't care. but i did find a way into my comfort zone a bit later, when a family with like four dogs came walking down the main street. the little doggies were all dressed up in costumes, and i am proud to report to you that i went up and asked the family if i could take pictures of their doggies. i figured that this would not be looked at as strange behavior. they accommodated me quite nicely, stopping and corralling their dogs together for me. i felt quite good about this. 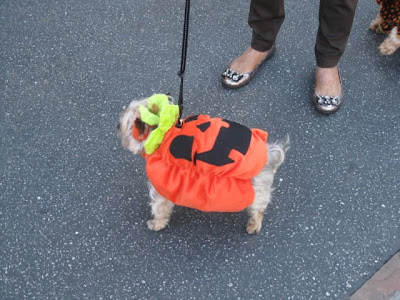 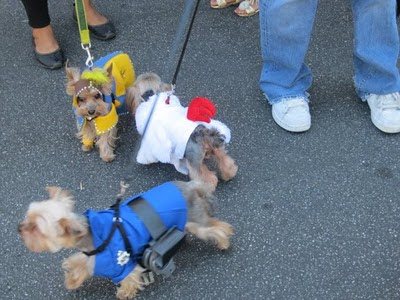 in a way, this was a little triumph for me, just being able to ask people to take pictures of their doggies. i guess that i am always afraid of being noticed--in a bad way. most of the time i can get around this city feeling fairly invisible, but every once in a while i open my mouth and there always seems to be someone nearby who disapproves of what i have to say. the best way for me to explain to you why it is hard for me to approach people in los angeles for anything is because i don't feel welcome here. i don't have a family, i don't have doggies, i am an older single man with an education and a bit of a grudge. and i really really want to find a place where i feel welcome.

a couple of weekends before halloween i participated in the city's very first CycLAvia event. i was very excited about this event because it was modeled on similar events that have been occurring in the country of columbia for years now--basically the city closes down a long stretch of street right in the middle of the city, and without making an agenda, they open it up for the residents to do whatever they want in the now empty streets. from what i have read, that can be anything from soccer games to bands playing to bike riding to bbqs. so los angeles decided to host one of our own, closing off a seven and a half mile length of street from hollywood past downtown into boyle heights. the weather was glorious and hot, and i had the morning off, so i took my bike and sunscreen and rode down to where the route began. this was off of melrose, where the bicycle kitchen community is, which is more of less a gathering of bicycling businesses for the bicycling dudes and gals. there were lots of folks there--riding around, walking around, milling around, and i loved the vibe. 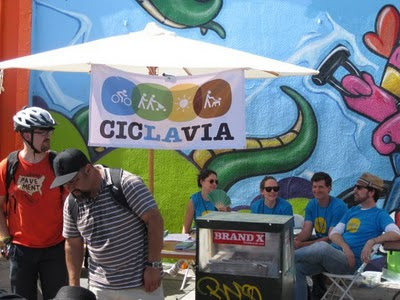 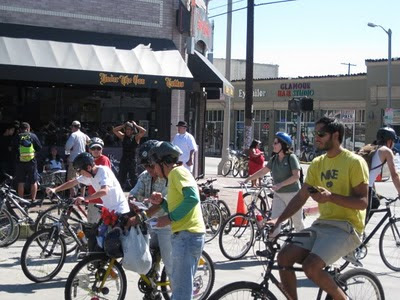 i was very anxious to see what was happening along the route, so after a little while i began to ride southeast along the street, along with many other riders. in fact, the route began to resemble a "ride", in that the main activity was riding. 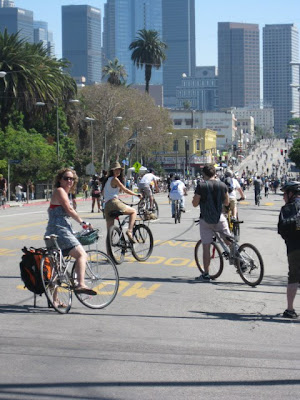 as fun as the riding was, i must say that i was disappointed that there was not more of a variety of activities taking place on the street. the residents along the route were out on their porches or steps more often than not, but many of them were passively watching the riders, or in worst cases, just looking confused. i am not sure they knew what was going on, or what they were allowed to do. i did come across a few small bands and a dodge ball game, which were fun to watch. 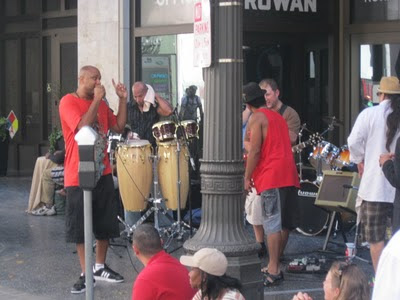 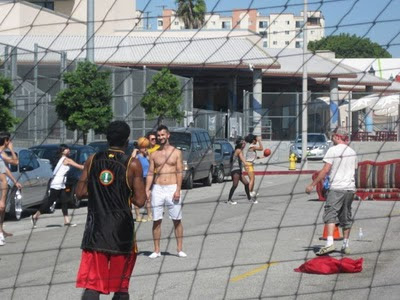 but all along the entire seven and a half miles down the route and back, i only met and spoke with one other person. one. he came up to me and said hello as i was taking a photo break. his name was jose. we chatted for a minute and then i rode on, crossing over the bridge into boyle heights. 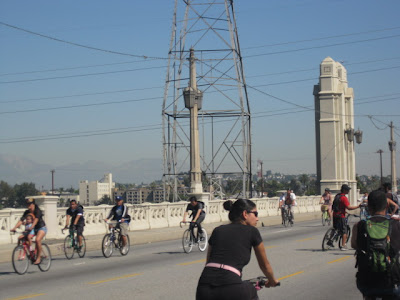 although i had a bike and definitely fit in with the crowd, i was not feeling like i was one of them. the crowd was too big and too unknown. in a way, i was trying very hard to feel liked i belonged there, knowing all the while that i didn't feel that way at all. it is just too damn hard for me, and i don't ask for either understanding or pity from you, the readers. rather, i am just telling my story. i had a great time nonetheless, but it was a great time by myself in a big, big crowd. the promise of community, for me, was not realized. 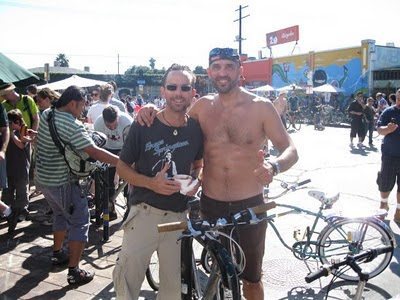 maybe it is not so bad, knowing one person, especially when it is a great friend like dave. maybe that is enough, to have just one like this. maybe. 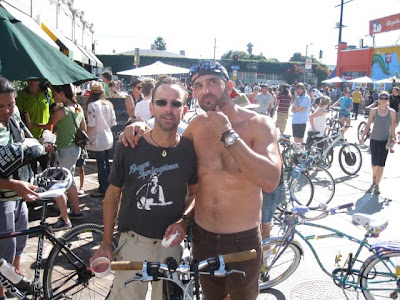