why atheists love christmas more than you do, part two

i started getting real christmas trees around the time i was in my mid-forties. before that time i am not sure i ever really thought about doing so.  when i was a kid we always had an artificial tree--we used the same one every year that i can remember.  i still remember how the branches were color-coded on the ends so that we knew where on the trunk to attach them.  can you imagine just going bonkers and attaching them any which way?  now THAT would have been fun, but alas, we stuck with the rules in our household.  my mother did all the tree decorating, at least until we were old enough to help her, and back then she used to make a lot of the ornaments by hand.  i actually helped with the ornament creation at one point, being a "creative" young lad.  we would use push pins and sequins and cover the ornaments with our own "designs".  it was fun.  these days, my ornaments are designed by jaclyn smith and martha stewart.  ha.


the time that i started buying live trees for the holiday coincided with my desire to have my own "adult" christmas in my own home--the way i wanted it to be. this didn't mean having orgies and booze flowing down the walls, it just meant no more going to my brother's house.  both of my parents had died, so there was no longer any obligation there, and i hate travelling during the holidays anyway.  part of this desire to create my own christmas holiday was the feeling that i wanted to make something happen that i had never experienced on christmas--namely, a home filled with warmth, good friends, holiday music, and great food. so i began a tradition of having an open house on the eve of the 24th, inviting my los angeles friends and preparing a dinner buffet spread complete with desserts and beverages.  i have been doing this for six years now.

you know when you have a sense of something that you want, and even though you have never had it, you just know what the experience would be like? perhaps this sense comes from witnessing such events in other situations, but nevertheless it always amazes me how possible it is to create, in reality, the experience i long to have.

the christmas eve gatherings were an instant success, for me and seemingly for my guests, and i felt as though i had indeed created the kind of holiday i had always hoped for.  friends came and went, the drinks flowed, the food filled tummies, and at the end of the evening i would feel...happy.

each year i would make adjustments to the menu, adding a new recipe, repeating some favorites, offering more, paring it down.  and concurrent with that i would try to tweak the house decor as well.  i would place the tree in a different area, have a changed color scheme, add new decorations.  this year i went all out, and i truly feel that the apartment has never looked better for the holidays.  after a rather subdued "winter blue" color scheme in 2011, i decided that i wanted color--lots if it--bold primary colors brightening up the place.  so i started with traditional red and green, and then i added blue, noting this color combo in one of martha stewart's magazine spreads.  i couldn't have been more pleased with how it all turned out--though the full decorating process took over a week.

i had decor of some sort all over the place.  i found this great tinsel garland tree at target for 18 bucks and thought it would be perfect for my office, and it was. 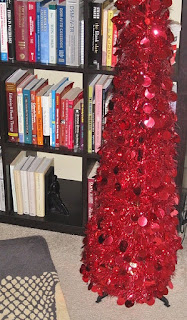 i placed a small spotlight underneath it so that at night the tinsel was lit from within--it was gorgeous!  i found little evergreens at trader joes, perfect for the end tables.  i put lights in the windows that simulated snowflakes, and "candles" that would turn on at dusk and turn off at sunrise.  it may sound like a lot, but i think it was just enough.

the whole shebang accented and followed the main color scheme.  i should do this for a living!

and of course i had a welcome sign on my door, because that is where it all begins! 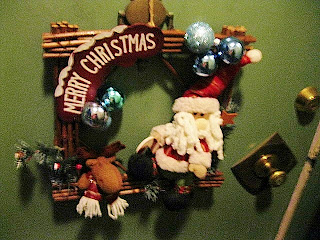 for the buffet table at my party, i had a vision of a sort of fantasy christmas scene:  a tree surrounded by a train track, with a christmas train of course.  and fake snow.  of course. 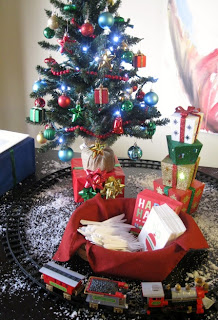 and then i imagined that the buffet dishes would look great sitting on giant christmas "presents", wrapped in the same color scheme, of course!


i share all these details so that you might appreciate my friends' dismay at how much i am into the christmas season.  for some reason, they equate my atheism with being a party-pooper during the christmas holiday season, and the truth is really quite the opposite.  the best way for me to explain it is that atheism, for me, released the holiday from its religious constraints.  in my mind, christmas, at least culturally, is in a war with itself.  it tries to be both one of the most sacred of observances in christianity, while also being the greatest tribute to consumerism that occurs during the year.  this results in the conflict of interest i described in part one.  most people, religious included, have a fairly easy time incorporating both aspects, since that is what most of us grew up knowing, but as christmas has become bigger business, the divide as started to grow.

my ascent into atheism forced a different meaning onto christmas--a deeper meaning, one that related directly to me and the kind of life i wanted to have.  it was less about getting stuff and more about giving stuff, less about consumerism and more about community.  i always say that meaning is more powerful if it is self-assigned rather that externally sourced, and that was certainly the case here. my dream for a certain christmas eve experience lent the holiday the power to connect me socially to my friends and peers.  it lent the holiday the power to re-cast me as a creative type, something i have lost a bit of touch with since my 40's.  it would not be an unreasonable reach at all to connect my increasingly elaborate christmas decor to my increasingly meaningful lack of faith.  there is simply nothing to feel guilty about anymore!

and this is the secret that the faithful never suspect when it comes to atheism. atheists tend to enjoy life more, because we spend less time feeling guilty.  what we DO spend time doing is making sure that we live life fully,  because the reward is in this life, and there are no do-overs, so everything carries more relevance.  we don't have the "luxury" of eternity, as the faithful do, so there is a vital urgency to what we choose to do, and an greater attention to the present time.  so for me, i can answer my friends that i celebrate christmas so big because the chance to create community means so much to me.  in fact, it is practically what i live for.

i read an article in the new york times early this year about some of the benefits of being an atheist, and the author, susan jacoby, wrote this absolutely fantastic line about the atheist value system:  "the absence of an afterlife lends a greater, not a lesser, moral importance to our actions on earth."  the way i understand this is that life and death, cause and effect, for the atheist, are under our power to notice, engage, and influence, as opposed to being simply events we are passive audience to.  for us, "thou shalt not kill" is a choice, rather than a commandment, and so our decision to not kill is more solid; it is more of a statement of purpose in life.  for example, i don't kill because i don't want to be a killer--it would not be a pleasant experience for me (or for the other person!), NOT because it is "bad" according to someone else' rules.  because of this, i assert there is a greater chance that i will not kill than someone following the ten commandments.  if you don't believe me, just look at the incidences of abuse in the catholic church to understand how ineffective outsourced morality is.

for the holiday, my desire for community is not something i can simply "pray" for--if i want to be surrounded by community, then i had better do something to make this happen!  and this is how i end up with a buffet full of food and a house full of friends every christmas eve.


this, for me, has meaning.  and this is why i am sure that i love christmas more than you do. 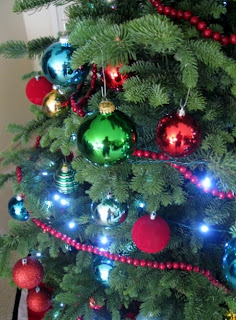