"This House" #2: Relevance and Dementia 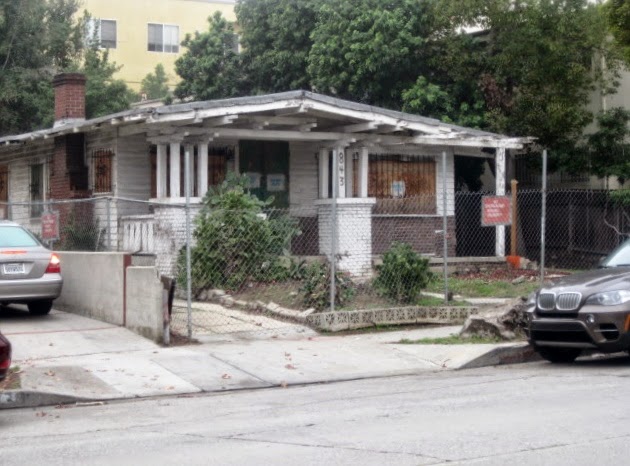 Good gracious, what happened to this poor little house. I found this place about a block away from where I live--yet another example of a hundred year old bungalow that is bound for the wrecking ball very soon. As mentioned in previous posts, the neighborhood I live in used to be completely populated by these small homes, and when the culture in Hollywood shifted in the 70's, so did the state of its old homes. Whereas originally there may have been a single family living in this place, as time went on I have no doubt that it housed perhaps multiple families, or even multiple individual renters. As old Hollywood decayed, the new culture re-purposed the old abodes into flophouses for broke actors and/or dealers.

It is a shame, really, but I can't spend time grieving over it, because I am more fascinated by change than homeostasis. This particular house has given it a good fight for nearly 100 years, and I would bet that it is ready to give it up. It is no longer relevant to the neighborhood. I am sure that its wood floors are tired of being stomped on, its old walls are sagging from the weight of holding up the ceiling, and it even seems as if the roof is just about to collapse on the whole thing. If I were to take a guess, I would suppose that the last tenants were perhaps a large family of immigrants, or perhaps even a descendant of the original owner--someone who spent their days behind drawn curtains and dust, peeking out at the new world from old world eyes.

The fencing around the house is the sign of death--the indication that demolition is just around the corner. I always look at the fencing as a sign that the house is in "hospice". Once it is torn down, it will be temporarily a vacant lot such as this one, recently cleared. 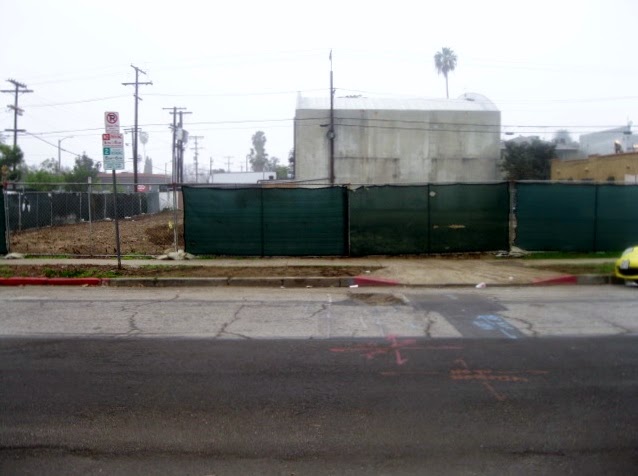 I remember walking past this lot only a month ago and there was a doomed home on the site that included a brick fireplace and a backyard with a shed. A shed! My imagination went crazy thinking of the place in its prime in what--1935? I am pretty sure that the next time I walk past this cleared lot there will be some new construction already beginning. I am curious what they will build, since the lot is across the street from this new mod palace: 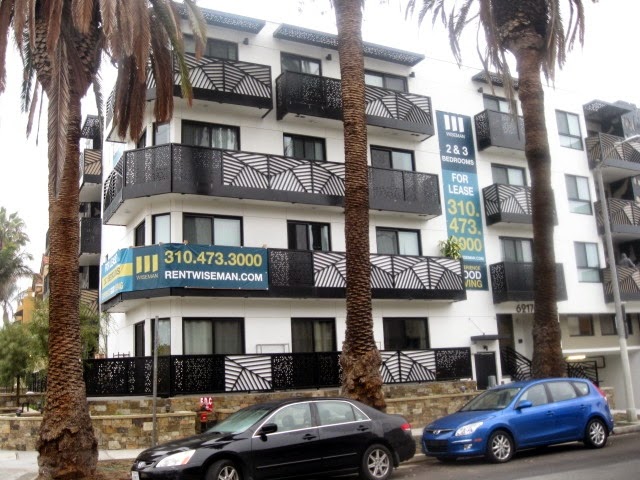 You know how much a 2bed/2 bath will run you at the swank place? Well, since they are sold as condos, you will be renting from the owner at the tune of $2695/mo. And that is actually not too bad for new Hollywood. It is interesting to me that the website for the building fails to show the surrounding "neighborhood", which includes a mix of old homes, cleared lots, and stucco apartment buildings--but then people don't really "live" in their neighborhoods anymore, do they? They just drive through them to get to their underground garages and beautifully isolated interiors.

***
My mother would hardly recognize the world today, but I doubt that she would even be looking that closely if she were still alive to look. She died in 2009 at the age of 86 from old age and Alzheimer's, and the world she left was very much changed from the one she entered way back in 1922. Even at the time of her death, she was not what one would call "caught up" to all the modern technologies.

My brother and I tried to get her into "emailing" at one point during her 70's, but she never warmed to it. We thought it would be a great way for her to keep in closer contact with the family--you know how the internet opens up the world for a lot of older folks who are less inclined to get up and out. She knew how to type, so I thought it would be an easy learning curve, but it did not take.

These were the days before Facebook took over the world, so she never entered that fray, but I have a feeling that would have not been successful either. I don't think that it is because she could not figure out the technology of emailing, I actually suspect that she just did not care that much to keep in touch, as she was already beginning her retreat into the more primitive recesses of her mind by her late 70's . Five years later, when she was fully affected by her brain condition, her world had diminished not only in space, but in time. She carried herself through the care home as though she were a 20 year old blushing ingenue, and I was damned if I was going to let anyone break the illusion, if that were even possible.

I often think that, although I don't favor dementia, this would be a quite pleasant way to end one's (the apostrophe is correct here!) elder years. How wonderful it would be to primarily forget the fact that one's body was shutting down and their brain was eroding. How lovely it would be to instead inhabit an imaginary vista where one's youth and vitality were restored to their full glory! I remember Mom walking down the hall with me, her arm in mine, stopping to flirt shamelessly with any man who might be sharing the same visiting hours. You might think it would be sad and pathetic to witness, but I found it relieving. She had gone back to the world she knew best, where the rules were familiar and her power as a woman was at its peak. Facebook could have grown eight legs and stomped out Manhattan and she would not have cared in the least. A final and welcome bliss.

On the other hand I think that if my mind started to go, I wouldn't hesitate one second to take the gas pipe.

Not all forms of dementia are overt. Retreats of the mind can happen in many different ways, and some are chosen while some are not, but I have a hunch that aging is the trigger for many a retreat of the mind, including some of my own. Lately I have noticed that I am very specific about which technologies I adopt, to the point where I could legitimately be considered "unusual" in my selectivity. I have never had a smartphone, which at this point, ten years into the IPhone, seems a bit ridiculous to everyone but me. I would not even know where to start, truth be told, because I feel so far behind. 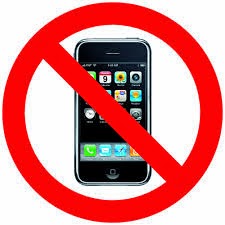 But I do feel immune from the constant pull of electronic attention that seems to affect everyone in the city, without regard to age, race, or economic status. I do not have a car, even though I have been driving since the age of 15. I prefer to bike and use public transit, and I prefer to not spend money on such wastes as car insurance, registration, and gas. The last car I owned was sold eight years ago, so I am behind the curve on the new features and options, and would once again have to do some catching up were I to resume car ownership. Once when I was trying to move a friend's car, it took me 10 minutes to figure out how to get the damn thing started.

Neither of the above peculiarities bothers me that much, since I would never describe myself as a person who is retreating from the world; in fact, I am more in the world now than I have ever been. But I will admit that as time goes by I get the feeling that it is less and less my world. I no longer keep up with the pop music charts, I have abandoned the pursuit of fashion in preference to "quality clothing" that will last for years, and I only recently started watching Parks and Recreation, even though it has been on for seven seasons and recently concluded its series run. I don't really have a problem with any of these descriptions. I do feel that I am less a creator of the current world. But I also wonder if one of the indicators of retreat is having less connection to what is current, or perhaps less caring for it altogether. While I would like to think that I am showing greater discretion in what I give attention to, I am not entirely convinced that this is not really just the beginning of the retreat.

Perhaps time will tell. For me the line in the sand is to never become the person whose sole barometer of the outside world is checking what is featured in the "seasonal" aisle at Walgreens. This is an activity, for your information, that I do currently enjoy! But I do not wish for my world to ever completely reduce down to being that small. Unlike the once beloved but now neglected and discarded old homes on my street, I want to remain relevant, at least to the greater neighborhood.