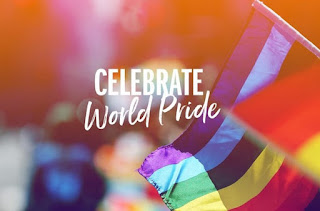 I should not be alive. The first time I should have died was when I was in the womb and only 8 months old. My four-year old sister had just tragically died of pneumonia and my mother went into shock, refusing to eat. If you don't already know this, the time to stop eating is NOT when you are eight months pregnant. It is amazing that I did not die as well at the time, leaving my family with not just one, but two horrible tragedies.

I lived, and was born, and I found a way to thrive, against all odds as they say, by learning to "take care of myself". I probably had my first chance to build this skill on the day I was born.

The second time I should have died was when I was fifteen, and I realized that I was attracted to boys and not girls. Because of my Catholic upbringing, this realization was cause for panic rather than celebration, because being gay meant sure hellfire. I suffered from a depression that I could not talk to anyone about. Music is what got me through.

I lived, and I found a way to thrive, because when all was said and done I didn't want to die. I liked life, I just didn't like how others were defining it for me. So I decided to define it for myself.

Today, at the age of 56, I celebrate World Pride Day and Stonewall 50 by taking pride in who I have become. But I did not become me by myself. I found my people and they lifted me up, and continue to this day. Among them are Carla Stephens, Melani Lust, Eric Rosenblatt, Barry Schwartz, Andrew Tee, David P Organisak, Teresa Onstott, Marta Garza, Zuniga Gloria, and of course Keshav Tyagi. Without them and many others I have lost touch with (Michael, Connie, that Protestant minister at the Naval Academy who understood why I needed to leave), I am not sure I would feel very proud of who I am.

I make things beautiful--those who know me know this. It is my way of feeling safe in the world and my way of showing love. I did get this from my mother, who, in the midst of crushing grief and guilt, was still able to create a beautiful home for her tiny queer baby boy. That is what she was capable of doing at the time. It is perhaps the greatest gift she gave me--she showed me a way to love when it seemed there was no reason to do so.