THIS IS MY BOYFRIEND 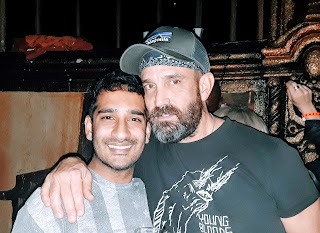 "Can you please stop at Sunset to drop off my friend?"

***
The other night I thought about wearing my blue hair wig to a Fisherspooner show here in Los Angeles, but I thought better of it. I have a bit of trouble showing my "freak" in mixed company, and I was not sure what crowd would be at the show.

I was right to be cautious. While Fisherspooner is rightly looked at as a queer act (based partly on the number of mostly naked mens who populated his stage show in versions of g-strings and harnesses), one can never be too careful about self-expression these days. Upon arriving, I noticed that the majority of the crowd was indeed queer, but also quite "normie" in that they easily could have fit in at the local Target without getting a single double-take. There were, of course, a couple of dolled up drag queens and one or two who-gives-a-shit fashion boys who bravely carried the torch for the rest of us closet freaks. But that was okay. At 55, I don't need to wave my flag for all to see anymore.

I was dressed, nevertheless, in a way that some might call "stretching it", were it not for my level of fitness and good skin. If you aren't sure of what you can pull off and what you can't, what can you be sure of? So despite my outfit I was confident of my safety on the stretch of Hollywood Blvd. that houses the Fonda Theater. I was queer, but not uncomfortably so. This is how I prefer to walk through the world. 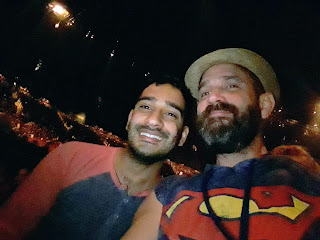 I have written before about how my personal becomes political merely by being a gay atheist. I mean, I am pretty much a target for half the nation from the time I walk out the door by virtue of those aspects alone. Fortunately, the half of the nation that has it out for me is not too sharp in the skill of decoding subtlety, so most days I return home unscathed and unthreatened, just another white guy returning home from the world.

I like it this way. I prefer to wage war with actions taken within the confines of my apartment; actions that are effective despite being less demonstrative than, say, marching in the streets. Have I ever mentioned that marching in the streets strikes me more as individual empowerment than as a tool for systemic change? No matter--to each his or her own. But if you have not picked up on this yet, these days I would rather fly "under the radar". This is out of respect to both my safety as well as the well-being of those who care about me. (Don't they say that true war is not waged in the battlefield, but rather in the boardrooms?) In other words, if I am going to fight, I am going to fight smart. I have no intention of getting hit by a stray bullet or an errant bayonet. That's no way to go, I say. I still have way to much to do. 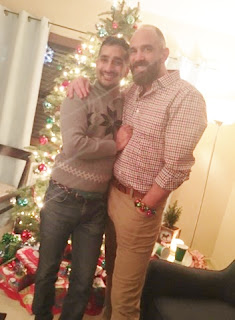 So the night of the concert, after I had left the theater, I found myself in an unanticipated situation when my boyfriend asked to ride with me in the LYFT to Sunset Blvd., where he could then easily walk back to his place. It wasn't his presence in the car that was unsettling, it was the fact that now I had to let the driver know that we were dropping someone off on the way to my place. I did it sort of like this:


"Can you please stop at Sunset to drop off my friend?"

You may have spotted the gaffe, but if not please allow me to point it out to you. I had just publicly referred to my boyfriend, my gay boyfriend, as my friend.

Believe me, it was noticed, not so much by the driver, but certainly by my boyfriend. He proceeded to repeat back to me, "Your friend? Your friend?", until it became obvious to me that it must also be obvious to the driver that we were, in fact, gay boyfriends, and that I had just referred to my gay boyfriend as my friend.

Despite my best efforts to fly "under the radar" long enough to get safely home, I had now been outed by my own best efforts to stay in the closet with this LYFT driver.

I cannot and will not blame my boyfriend. He was 100% right in pointing out the mistake, and I can only thank him for doing it with a sense of humor instead of outrage. But the question lingers in my mind: "What the hell was going on with me to say such a thing?" 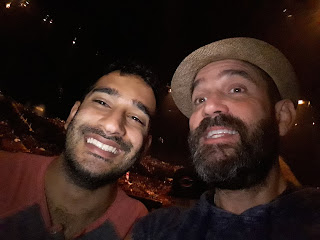 I have lived thus far without too much overt damage from the effects of homophobia. All in all, I would say that I have fared far better than most. Oh, I have had my share of indignities, to be sure. In grade school I was teased because of my "sensitive voice", my close friendships with girls, and for wearing V-neck sweaters as shirts (it was a look, dammit!). I suffered the self-loathing that results from my Catholic teachings that homosexuality is a sin just a smidge less evil than, say, murder. I recall to this day the feeling of my stomach nearly turning in on itself as my 17-year-old self reluctantly answered my mother's question of whether I was a homosexual with a shaky I think so, followed by wanting to throw up. I came of age during the dawn of the AIDS epidemic, when my 20-year-old sex drive was forcibly smashed into submission by the utter terror at possibily catching a deadly and horrible disease that the government did not care about and nobody yet knew anything about, including how it was spread. I was openly told by my brother, while struggling through my first year at the U.S. Naval Academy, that my being gay was the cause of my father's alcoholism and the reason the family was falling apart. I was once lectured by my sister, who informed me that my "need" for family acceptance was not nearly as important as our mother's peace of mind, because, well, I was smart and could take care of myself (she was half right). I remember standing, after a show, outside the Celebration Theater in Hollywood when a passing driver threw glass bottles at me and my friends while yelling "Faggots!" (fortunately, their aim was as off as their intellect, and they missed us). I remember being verbally assaulted and physically threatened by a passerby while discreetly leaning against my then-boyfriend in front of his apartment building one night in Hollywood. But still, I have fared better than most.

Those are just the overt examples. The covert homophobia is not so situational. It is, rather, systemic, affecting gay men and women everyday in a variety of ways, even if it is affecting them from within their own emotional lives. 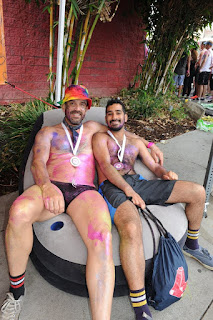 When I referred to my gay boyfriend as my friend, in my mind I tried to tell myself that I did it to protect him, that I was keeping him out of harm's way in case our LYFT driver was not as progressive as I might hope. But that is not the truth of why I said it. The truth is that I was motivated by shame--the same shame that I felt over 40 years ago when my voice was ridiculed for being senstive, the very shame that caused me, years later, to manipulate my speaking voice into a more masculine tone. It was the same shame the made me re-think the blue hair wig on the night I went to see Fisherspooner, despite how great I look in it. It was shame that influenced me to put my boyfriend's feelings second to my fear of being judged. I wanted to avoid seeing the driver's eyes checking out his gay passengers in his rear-view mirror. I wanted to avoid whatever I thought he would think. I wanted to be just two passengers--like any passengers he might drive that evening--I didn't want to be political simply because we are gay and my boyfriend needed to be dropped off on Sunset Blvd. on the way to my place. 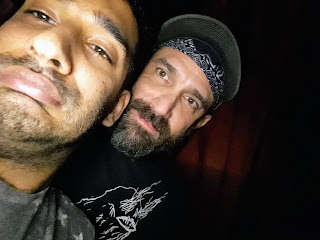 I decided to write this essay because, though I am not proud of what I did, I want to be proud of what I do now. I love my boyfriend. I love being gay. I love that he is 30 years younger than I because there is nothing like his 20-something-year-old lips. I love how he accidentally coughed into his mimosa the other week and sprayed me with the beverage inadvertently. I love how when he tries to act sexy he ends up resembling a drunk Lana Turner. I love that he loves me and that we are both men and that we have had sex together so many times that if there is a hell (there isn't!) I would have a front row seat at the foot of Satan himself. I love that he went out of his way to understand why Borderline, by Madonna, is such an important song to me. And I love that at the ripe age of 55, I can finally love someone without hating myself.

I did not demonstrate my love for these things the night I asked the driver to let my friend out at Sunset Blvd., but we are never "done", are we? That night I may have diverged from my goal of affecting systemic change, but in this essay I hope to get back on track. And I will never again refer to my boyfriend as my friend, not because the designation "friend" is a lesser descriptor, but because it does not tell the world the truth of who he is to me, or the truth of who I am to him. And I am tired of shame keeping me from telling the truth.

THIS IS MY BOYFRIEND. 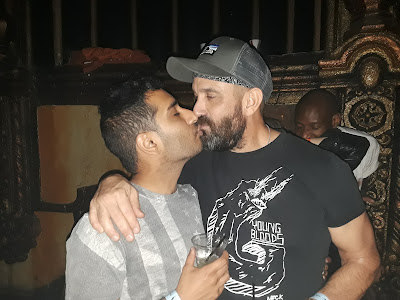