Time to Talk About Dad 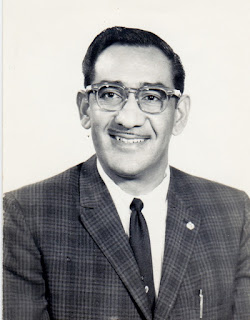 I have written a lot about my mother. For some reason, she beckons to me as a portal from which to explore myself and my responses to the world.  If I may be so bold, I contend that my relationship with her is the birthplace of my initial relationship skills. This is, of course, a plus/minus statement, in the way that most statements about families tend to be. But I have come to a place where I don't expect it to be any other way, and at this point I am far enough from my lived experience with Mother to mine it for literary inspiration without getting covered in soot. Thank you, Time.

My father, on the other hand, holds a more slippery position in my evolution. I suppose it is past time to give him some due--not that I would deny his right to it--it is just harder to categorize the benefits derived from our relationship.

Fathers have had a rough time of it, haven't they? From an evolutionary standpoint, it is a fairly modern definition of paternity that dominates the landscape today; the father role used to be, like most everything else, something that was shared by many. I would suspect that things changed around the time that agriculture came around (the new blame dump--and you're welcome, mothers of the world!). Since the time that land ownership became a "thing", there needed to be some structure to the passing down of property. Suddenly, paternity, and the heirs produced by the same, became very important and localized, and the idea of sharing receded from being a community value to serving the immediate blood family circle. This, of course, was a shame, but for my purposes it serves just as a meditation on history so that I can frame the impact of my father's legacy.

This is not a bad thing, so before you jump to conclusions about my level of appreciation, let me clear things up a bit. Mother scores a 10 on the scale, but that is not necessarily a wonderful thing. A scoring of 5 is remarkable in its own way, in that the impact of a 5 is influential while evading lasting damage. A score of 5 is, for my father, perhaps the greatest compliment I can offer him. It means, essentially, that I got out of it alive and well with more than a few stories. That, in itself, is a success!

Dad had no fucking idea what to do with me once I turned 15, so he focused on my brother, who suffered quite a bit as a result. (Dad never practiced wrestling with me, but he did with my brother, who remembers the competitive nature with something other than a "warm" memory.)
Dad instead left me to my mother's devices, which worked, unless it didn't. I was studious, and quiet, and quite sensitive, which does not exactly generate enthusiasm in a father who lettered in practically every high school sport that was offered. But do not assume that my father ignored me, or was disgusted by me. Not in the least. I suspect that instead he feared me a bit because I represented something he did not understand, something that had the potential to reflect badly on him, but that was nonetheless connected to a part deep of him. I was able to be sensitive while my father was not. He had to be a man very early on, while I got to skirt the issue until after I had done some "research" on the subject. He was proud of me, but I doubt he was sure why, since my accomplishments weren't flashy. I would like to think that he was in awe of me, and that is why he kept his distance, but perhaps that is just a story I have made up. (I like it though.)

I do know that he loved me as a son--as his son, and that his encouragement showed in his eyes rather than his voice; his kisses to the top of my head and salutations of mijo that reminded me I was his son and this meant something to him. What it meant, he never told me, but I like to imagine that I personified the freedom he rarely granted himself. For all my passivity, I was quite fearless at times, and the more I corralled fear, the more he was corralled by the same. My ascent matched his descent, and there was little I could do about that but embrace my time, just as he did with his many years before. 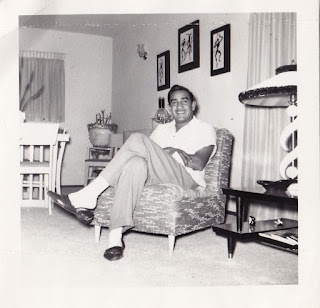 A male child moving into young adulthood must be difficult for any father, since there are inevitable shifts in power; in my family Dad's decreased while Mom's solidified. You know what I mean? By the time I was 16, homosexuality became the shiny new love that pulled me from the family, while my father was increasingly lured by alcohol; thereafter the power shift was complete. He then lived out the rest of his life as a shadow, attempting to reach former glories by standing on a bottle of whiskey. He didn't have a chance at this point, and I think that this is when I loved him the most; he became human instead of being the cigarette ad who used to kiss me goodnight in my childhood.

This is also when I hated him the most. Ain't love grand?

The hate I felt for my father was based in grief. I was losing him to alcohol, and I was left to become a man on my own. He could have taught me so much. My father was an All-Star athlete in high school, as well as being the best dancer and a definite ladies man. He was kind, funny, and affectionate.


He was quite handsome, but because I was born when he was 34, I never really knew who he was as a young man--by that time he had learned to accommodate his virility to white culture--realizing that a dark-skinned Mexican man would have to do more than play sports well to gain respect. He succeeded in this, gaining not only respect in business, but also the hand of my mother, who at the time was a tall, striking redhead, and perhaps the only person who could keep up with him on the dance floor. They were terrific together, for a while.


I didn't hate my father forever, though. As an adult, I learned that his dependence on alcohol increased after his young daughter Marla died, a tragic story that affected everyone in the family. For all his outer strengths, he was ill-equipped to manage this searing inner crisis.

I often wonder who he would have been had Marla lived, and respectively, who I would have been. Even still, the gay thing was sure to separate us, at least until we ultimately united as fellow "black sheep" of the family. You see, as my mom and my brother both embraced mormonism (lowercase intentional) for the illusion of control and safety (I don't blame my mother, as she was aging and needed those things. I have less compassion for my brother.) As a result, I was soon joined by my father on the family time-out bench. The conversation went something like this:

Finally, after so many years, we found a place to connect.

My father died six months after being diagnosed with cancer in his lungs and in his brain. He was stubborn as hell, so he would not go to the doctor despite having seizures and fits of rage, so by the time he was diagnosed the cancer was inoperable. When he died, my mother, now free of the alcoholism that had ruined her marriage, waited just a couple of weeks before throwing out all the furniture they had shared, replacing it with all new things that she wanted in the house.

As Father's Day comes and goes every year, I think about the relationship my dad and I would have if he were living now. Don't we all wonder that of our parents? His life was sparked in a different time and the flame of its peak burned bright and early. He was, like my mother, both a product and a prisoner of his times, but he is 50% responsible for creating me, and I like to think that in some way I am now living the life he would like to have lived. I owe him my life. And for that reason alone, his life was not, as my mother's furniture replacement indicated, disposable. His pain and his triumphs showed me the levels to which we can rise or descend, and our joining toward the end showed me the depth of his vulnerability and forgiveness. He was my father, and he loved me, best as he could goddammit! Love does not require complete understanding or perfection, only willingness. In this area my father's levels never dipped. This comforts me, even to this day. I miss who he was to me during the best of times, but even more so, I miss who he could have been to me during my worst times. We were so close to getting there before he died. So close.

My appreciation for him grows as time continues, not because I drop into a hazy recollection of who he was, but because I better understand the things that kept him from becoming who I wanted him to be. His struggle unites me with him, and his potential was not fully unrealized; it lives in me, his son, and continues to unfold through my efforts to live as a free man. Plus, I am one hell of a dancer.