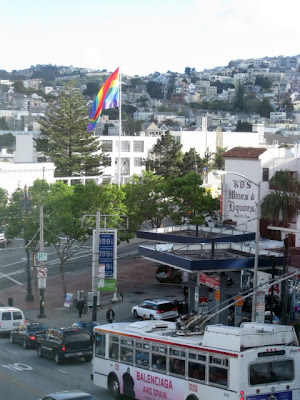 on the last day of may, i flew into san francisco for a few days of r&r before my stint crewing on the aids lifecycle. i stayed at a b&b in the castro district from tuesday through sunday morning, and i took no netbook with me...instead, i took an old fashioned composition book and a pen. i found myself writing--a lot! this series of posts are my transcriptions of the writing i did in the foggy city. below is day two in the city.

woke late today because i got to sleep late...frustrating, and not how i preferred to spend my first night and morning in san francisco. but what was i to do now? the day, and the city, was waiting for me. i treated myself to breakfast at the b&b: poached eggs on sauteed kale with shaved parmesan--delicious. then i did what any angelino does first day off when abroad (at least the gay ones)--i went to find a gym. i walked to a 24 hour fitness and did the best i could, given the lack of sleep and the continuing recovery from my cold of last week (how long do those things last, anyway?) it felt good to work out, but i also, at times, felt like throwing up. an odd mix of sensations, to say the least. i felt off, an unusual and unpleasant feeling, especially when in another city on vacation. but then, as asked before, what was i to do? i am fully aware that my mood depended less on how i felt and more on how much time i spent wishing i felt otherwise. feeling otherwise, as it were, would happen in good time, i was sure, and i knew that while i could contribute to its arrival, i could not control its timing. so after my workout, i did the one thing i thought might help: i went back to the inn to take a nap. 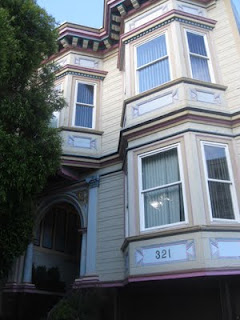 my b&b: inn on the castro

it helped. so did the pair of shoes i bought on the way back...

after my nap, i ended up meeting one of my clinical supervisors, richard, for tea at peet's coffee. he happened to be staying in the castro this same week,. and we both agreed that it would not be unethical to meet for a beverage. we had a wonderful conversation, and we both learned things about each other that we otherwise would never have known, in all probability. i very much enjoyed it. we each had dinner plans, but before we went to our respective plans there was still time to meet his hosts and take a look at their home. 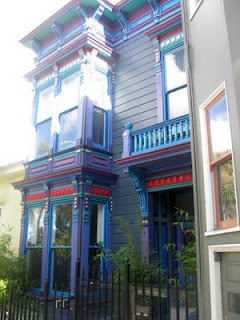 joel and sam own and operate the castro suites, and richard has known them for many years. as a couple, they are approaching fifty years together. unbelievable!! joel is a painter, and sam makes ceramics, and their home is awash in art, color, and collectibles. both of these men, and richard as well, have long histories with san francisco, and the castro, and were able to both revel in, and survive, the time before and during the appearance of aids in the city. it was a different time, to be sure.


this year marks thirty years of aids, and to acknowledge this there is a huge red aids "ribbon" installed on twin peaks hill. 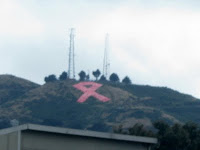 thirty years. that's a hell of a long time. i am old enough to remember what it was like back then, when i was barely an adult and living in san diego. i remember how terrified i was, like everyone else. that terror, and the effect it had on my behavior, is most likely the reason i am alive today. i am grateful for that. i like being alive, even when i feel off.

that evening i had dinner at a great restaurant called absinthe, 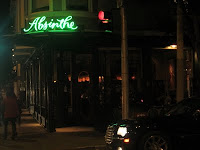 in the hayes valley area of the city. i was told that the restaurant had been there for years, and on a wednesday night, it was full. fortunately for us (me and my date), we got there early enough to get a table without reservations. dinner was fantastic, as was the company. we ended up getting four different "share plates", which is the most fun, because we each got some of everything we ordered. here are a couple of the dishes we ordered... 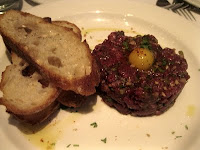 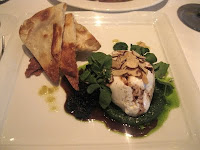 and, in homage to my friend dave's way of being in restaurants, we chatted a bit with our table neighbors. as a gay man, i love being able to share a dinner with another man openly amidst straight couples, and feeling as if it were perfectly natural. and it was. the young couple next to us were charming and personable, and responded to me and my date, and the affection we were displaying towards each other, with utter ease. for me, this is infinitely more interesting and satisfying than ensconcing myself in a "gay restaurant" in a "gay neighborhood". perhaps that is because i identify as a human being who is attracted to men, which is subtly yet distinctively different than identifying as a "gay man". discuss.

later that night, after my date, i fell under the spell of the melatonin i took--i wasn't going to screw around with sleeplessness another might, and i dozed off into a deep and refreshing sleep.
Posted by Tony at 8:41 PM